Placeholder.
The consciousness whole
is the sum of all its parts and experiences.

Barbaric Wars!
See the moonlight
sparkle
on the water!

The only reason I can write about consciousness is, that I, like all of humanity have it. It’s existence became more of a reality for me because of my wife’s illness, and the slow and inevitable decline of her consciousness via Alzheimer’s disease.

It took me on a 4-5 years  exploration into consciousness, and the bulk of that is in this domain on my Home page.   https://imperativeobservations.com/

As we are all on an evolutionary path, our life and knowledge hopefully grows in the right direction.
The exploration took me through a plethora of data and opinion about reality from authorities on science, religion, philosophy and metaphysics. Nowhere could I find a definitive conclusive argument, or agreement, that met my needs.
For me the question came down to “Is there anything at all that provides some form of construction, and certainty?” Something that has its own inherent ethical standards.
The alternative proposition to that is a nihilistic “nothingness”. A pathological proposition
that makes no sense.
Heraclitus’s “unity of opposites” seemed the most promising. My understanding of that now made dichotomies a semantic illusion. If achieved in a mindful way it is the act of uniting them, providing a consciousness correct experience of ‘what is’.

This has brought me now to my particular Space Odyssey.

The Cosmos.
Courtesy of Google “free to use images”

Consider the Cosmos as an imaginary jigsaw puzzle made up of all the planets in an ever-expanding Universe. If we view our life as an analogous piece in that jigsaw puzzle, in which we are separate fragmented parts required to complete the picture.
We live our lives with secondary knowledge that everything that is – is always interconnected and interdependent. Yet our illusory experience belies that form of knowledge.
As fragmented pieces we are not aware that for the picture to be whole, its completion is dependent on each individual piece, as are all other pieces dependent on that one piece.
The true reality of completeness is always there, but our illusory fragmentation needs dispelling to allow the fragment to fit precisely in its alloted place.
It is here that I understood Heraclitus and his “unity of opposites”.  Mentally uniting opposites replaces the existing illusion of their existence – there are no dichotomies!             Once the illusion is gone a new solution manifests that is peculiar to the mindfulness operator, and belongs to a higher form of consciousness.

Heraclitus.
“The Weeping Philosopher”
Courtesy of Google “free to use” images. 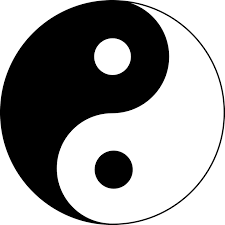 Yin and Yang the “unity of opposites” symbol.
Courtesy of Google “free to use images”. 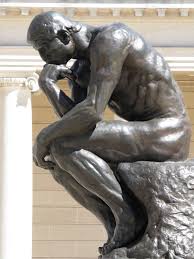 The Male Thinker. Courtesy of Google “free to use images”

The Female Thinker.
Courtesy of Google
“free to use images”.

The shorter posts will be my attempt to dissect the earlier 4-5 years work on this Home page. All that research is directly associated with Alzheimer’s disease. This will allow me to use this domain to post shorter content .

‘A meeting of minds”
Courtesy of Google “free to use ” images.

Share posts with a foreign friend in their language.

This site uses Akismet to reduce spam. Learn how your comment data is processed.